Another athlete, Another ACL injury? 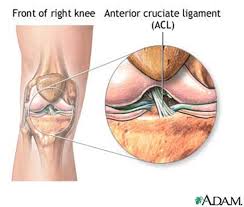 Another season, another professional athlete with yet another knee injury. The revolving door of injured athletes is common gossip fodder in the world of professional sports, where ACL injuries have seemingly dominated the list of season ending injuries. What has changed over the years to increase the prevalence of knee injuries–particularly injuring the ACL? Is it something in the human body or is it something about the sport?
What is the ACL?
ACL stands for anterior cruciate ligament. There are four
ligaments in the knee, but ACL injuries are the most common of
the he four. The ACL is located in the front of the knee and
crosses from the bottom of the lateral femur to the top of the
medial tibia. Imagine a rubber band located inside your knee that
prevents the lower part of your leg from bending too far forward.
Picture this: without the ACL, your knee would be able to bend
90 degrees forward from the point of your knee.
How do ACL tears normally happen?
ACL injuries typically occur during active movements of the legs, particularly running. It often
occurs in sports with the usual cause is a sudden force against your knee while the foot is firmly
planted on the ground. Tears can also occur as a result of an external force making contact with
the knee, though tears can also occur on their own. For example, someone is sprinting and
abruptly stops while the foot is instilled, the ACL is then at risk for damage. When one is actively
running and a rapid change in direction or even landing improperly from a jump can tear the
ACL.
Why do ACL injuries occur more often with professional athletes now than before?
There is currently no scientific evidence to support a higher prevalence of knee injuries, but
some theories attempt to explain this phenomenon. Sports have evolved in regards to skill and
complication over the years, causing athletes to attempt to physically adjust to these changes
as well. Thus, athletes need to be stronger and faster. However, ligaments are not something
you can strengthen. According to CBS Sports (2013), basketball has accumulated an arsenal of
new moves to accommodate the evolution of the game, such as crossovers and the euro step.
These new moves have created new stresses that the body has not adjusted to. It is believed
that ACL’s have the potential to be strengthened, however the method of isolating the ligament
and performing a direct exercise for the ligament has not been determined. According to Slate
Magazine (2012), many ACL injury prevention programs have been created but unfortunately,
the number of ACL injuries have not been decreasing.
With that said, there are exercises that may be beneficial by strengthening the muscles around
your knees, such as your quadriceps, hamstrings, and calves. With innovative medical
procedures and proper rehabilitation involving proper exercises, ACL injuries can be repaired
and restore individuals to their previous lifestyles.

Sources
Berger, K. (2013, October 4). ACL injuries once were rare occurrences in NBA, but no more.
CBS. Retrieved June 8, 2015, from http://www.cbssports.com/nba/writer/ken-
berger/24002325/acl-injuries-once-were-rare-occurrences-in-nba-but-no-more
Palmer, B. (2012, May 4). Exit Sandman: A torn ACL may have ended Mariano Rivera’s career.
Why are ACL injuries so common? Slate.