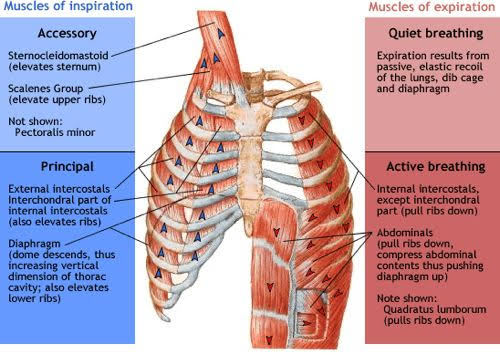 Why is everyone at MASF so concerned with breathing?
It seems that proper breathing patterns helps to regulate the sympathetic and parasympathetic nervous systems.  When folks are stuck in a sympathetically dominated state, their body kicks on the “fight or flight” response to the real or perceived threat by tightening muscles (toward the fetal position to physically protect the body), increasing blood sugar, change to rapid and shallow breathing, among other adaptations. One problem with this, from a muscular stand-point, is that shallow breathing often over-recruits the “accessory” breathing muscles. These muscles are often implicated in “forward head” posture and symptoms of thoracic outlet syndrome where you get nerve entrapment in the brachial plexus that innervates your arms and hands. From a health and wellness stand-point, the body only has so many reserves to work in this heightened state. Overuse can lead to myriad symptoms and may end up with adrenal fatigue or another major illness when the body is basically forced to give up.
The “Threat Bucket”
Brian and Benjamin study a system called Z-Health designed by Dr. Eric Cobb who has a great way of describing this stress system that we want to share  with you.  They call it the “Threat Bucket” and say that you have a metaphorical bucket in your body that catches all stress – mental, physical, emotional, chemical etc.  These can be real threats like alcohol or marathons, or it can be perceived threats like stress at work and negative thoughts. The problem is that the body reacts the same way, as it cannot differentiate between real and perceived. We find it helpful to remind people that your body has a certain tolerance for stress and once you hit it, it will find a way to force you to stop adding stress.  It may be foot pain with an insidious onset or may be an acute or chronic illness.  They signal of this will get stronger and stronger until you listen and create a better balance in your life.  By balance I mean monitoring, and adjusting if needed, the stress load that goes in and more importantly what you are doing to take stress out of the bucket to provide space for incoming stress that you may or may not be able to control.
Back to the breathing exercises – they are a remarkably effective way to reduce the overall threat load of the body and create space. The nice thing is they often have an immediate, as well as a cumulative effect over time.  They are incredibly powerful and we urge you to try them!

Be sure to try “High-Low Breathing”, as described by Brian and demonstrated by Susie, in the exercise of the month. It is an incredibly easy and powerful drill to get  you moving in the right direction. If you would like to learn more about this, please contact Benjamin Brewer or Susie Bergman as they have extensive experience coaching this with their clients.
** GUEST BLOG, thank you to MASF!